Well then. Initially, I was going to kick-start this blog back to life by posting the cool stuff I got up to in 2016… and that was at the half-way point last year! Needless to say, I found a good chunk of these in my archives, and figured it would be a shame to just let them go to waste, especially after all the time I spent slaving away writing them. I won’t be posting these one after the other, as I’ve got some awesome stuff planned in-between, but expect these to crop up pretty regularly. I would’ve contained all these events in one post, but each one is already essay in length! Therefore, I made the wise decision to post them all as separate posts (plus it means less effort for me in the long run. Win!) So ladies, and gentlemen, I present to you part 1 of Memoirs of a Ginger! Funnily enough, it’s actually been exactly a year since this event occurred..

It’s no secret to those of you that know me, I love Germany. So much in fact, that I visited it this year with a group of close friends. Being as a bunch of them share their Birthdays around the same time of the year, they decided that a short weekend partying in Berlin was in order. And an excellent decision it was too!

Long story short, I fell in love with Germany, again. Berlin is an incredible city.

It was amazing to finally actually see the Brandenburg Gate first-hand. After seeing it in pictures and on TV so much, it was a very surreal experience. It especially looked incredibly impressive illuminated at night.

The Brandenburg Gate at night. Pretty!

If I could recommend anywhere for drinks over in Berlin, I’d definitely recommend hitting-up Zyankali Bar! The venue had the look and feel of a steampunk science experiment gone wrong, with scientific equipment sprawled across the bar, and crazy apparatus decorating the room. Even better, they served drinks in beakers/measuring jugs! Given how zany it all was, it had a rather cosy atmosphere, and felt very welcoming. Oh, and the cocktails are delicious, but will blow your head off!

Zyankali Bar in all it’s blurry glory! (Disclaimer: I may have been drunk)

It was an honour to be able to visit the legendary club, known as K-17 during our trip (for a few of us, twice), but typing about it feels a tad bittersweet. For those of you that don’t know, it was an epic Goth and Rock club, sprawling across 4 rooms, each boasting a different genre of the scene. Since visiting, it has closed down, although it has reopened under new management, and a new name, Nuke Club. Since I haven’t been to it under its new moniker, my judgement may be misplaced. If anyone’s been, lemme know what it’s like!

What I can tell you, is that both nights I went to were absolutely awesome! The converted tower block of flats, and each room, had a gritty feel to them, which gave it a ton of charm and character. The music was superb, with the best blend of Industrial, EBM, rock and metal possible. There was something for everyone in the scene here! It genuinely felt like my home away from home. Plus, there was a Rammstein party on the Friday night, with Rammstein tunes all night long! Total bliss for me!

If you want to see the sights in a unique way, the Alternative Tour of Berlin is well worth checking out. It changes theme and route each time, so you’re always guaranteed to something different each time. This time round the main theme was the street art culture of the city, which was enticing and very stunning to look at. There were fantastic tales of the communities and gangs involved it creating this, some of them even sounded like something straight out of a movie (such as one of the gangs escaping the law by surfing trains.) We also checked out the house of Osman Kalin, who built a house out of nothing but rubble during the time the Berlin wall was up. He helped the community to become a well respected man, and they even came to his aid in his time of need. It’s an extremely touching and heart warming story, that will definitely brighten up your day. The best part was, this tour was free, although they do take tips at the end (but you’d be a jerk to not tip them!) It’s worth checking out our tour guide’s website too, she’s very multi-talented: punkrockdoll.com 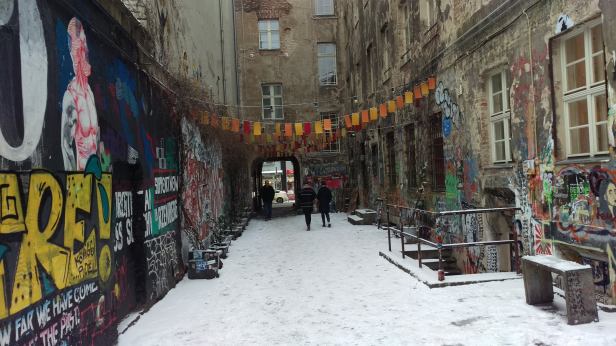 A street in East Berlin, literaly like stepping back through time…

This neatly took us across the East Side Gallery, the remaining part of the Berlin Wall that artists painted across the symbolise freedom after the rest of the wall was knocked down in 1990. Unfortunately, some wired fences were in the way, due to them restoring some of the artwork, but it didn’t make it any less stunning. Again, this is something I’d always wanted to see, and seeing it for real was a very inspiring and moving experience. It’s truly the purest expression of hope and freedom I’ve ever seen. 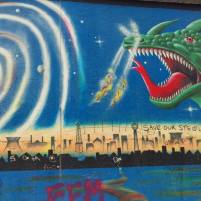 Walking the East Side Gallery!

Our time was insanely short, we’d barely even scratched the surface on what this amazing city has to offer! Still, it was an amazing experience, and I guarantee I’ll go back there at some point. I definitely have unfinished business there! 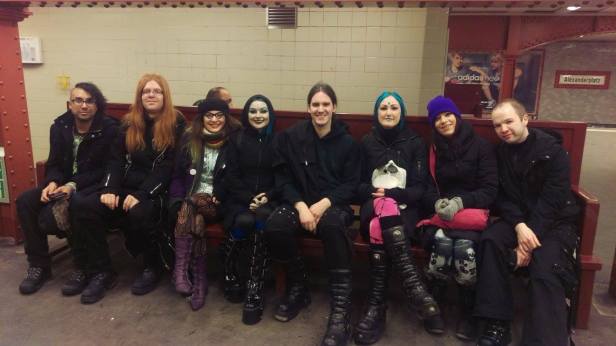