Ah Resistanz, a festival that has become close to my heart. The catalyst of my introduction to EBM/Industrial was at Eddies Rock Club, specifically, nights at Dystopia, but this was the final piece of the puzzle that set everything into motion! Ever since first attending the festival in 2013, I never looked back. It just makes it more tragic that 2016 was the last ever one. However, it was a hell of a send-off, the kind of finale that Tanz really deserved!

The events leading up to the festival painted a bit of a grim picture initially; Aesthetic Perfection pulled out, due to annoying reasons, synthpop act Ginger Snap5 had to cancel, due to not being able to get visas, and Zardonic also couldn’t make it at the 11th hour, because of visa issues. However, was that going to stop the most epic party in the world? Was it fuck!

So the Friday kicked off, the first day of the festival, and Petrol Bastard had the honour of opening the proceedings. Long story short, they were hilarious! Although when a band refers to themselves as a ‘Tesco value Prodigy’, you know you’re in for a treat. They flailed around stage, making hilarious comments throughout the set, and even bought giant inflatable penises with them. The industrial scene is serious business, yo! Back to normality, and iszoloscope performed a blistering set of distorted electro noise beats. It was good to see Neuroticfish return too, although I felt their performance wasn’t as good as their appearance a few years ago, but they were still great. Hits such as ‘I Don’t Need the City’ and ‘Velocity’ went down a treat, ending on everyone’s favourite cover, ‘Funny Farm’. Organ Donors were headlining the night, and even with one man down, the set was intense! For an hour, it sent the entire room into a frenzy of dancing and rave. It was sadly cut a bit short, but a night of hard after-partying made up for that. 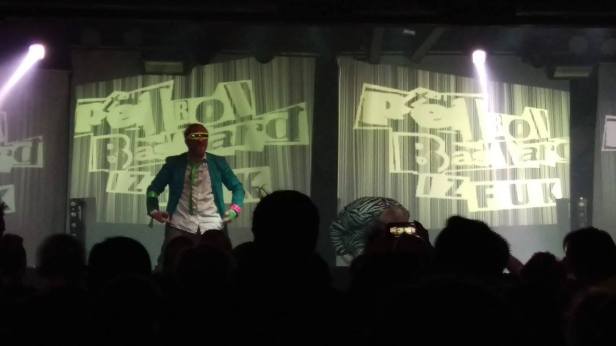 Saturday commenced, and Neonsol (who were the replacement for Gingersnap5) stepped onto the stage first at the stupid early time of 2:15pm (…yes, I’m lazy.) What transpired was an epic, atmospheric performance of highly energetic synthpop. They were definitely so much more than a worthy stand-in. Any fatigue slipped away, and the party really got going the minute it all kicked in. Randolph & Mortimer, whilst not as energetic, were still quite a spectacle to watch. The set was presented in “chapters”, with each song following on from one another like a story. It was a unique concept, and I loved the way they presented it, with it all building up to a brilliant finish. Terrolokaust upped the ante again, and presented a more industrial metal vibe to the day. They powered through their best songs, with some new additions, which went down an absolute storm. The biggest highlight was definitely their finale, with their cover of The Prodigy’s “Spitfire”. It was good to see them back, and better than ever. Cyferdyne, who were also making a return, were incredible fun, as always. With witty, hilarious banter, including an on-going in-joke of “Who is Jan Doyle?” that spread throughout the festival.

Whilst perhaps not as energetic as last time, their set was still stunning, and the new tracks they debuted have me itching to hear the new upcoming album. iVardensphere completely dominated the day, with their performance even topping their last outing! Nine of them took to the stage, and blasted out hypnotically catchy industrial tribal beats that were impossible to not dance to. It was easy to completely surrender to the atmosphere. A superb set! After another drunken night of partying, day two came to an end.

Sunday arrived, the final day, the last chance to Tanz. Even with the hangover from the night before setting in, I was not going to give up. This festival needed to be seen out with a bang. Once again, the party got going extremely early with Massiv in Mensch, and it put an end to any ill-effects from partying hard. It was a brilliant set of darkwave tunes, that included a cover of the classic “Popcorn”. Seraphim System kept the momentum going, with Swaggrotech awesomeness. Whilst he mainly performed tracks off his latest release, “Automaton Assisted Suicide”, he still got the room moving in a non-stop 35 minute frenzy. After a long hiatus, Alice in Videoland took to the stage next. Clearly re-energised, they pumped out a set of fan favourites, and clearly loved every second of it. With synthpop and rock (that reminds me very much of bands such as The Birthday Massacre), it was a nice change of pace for the weekend. They were certainly fun! Lab4 snuck onto stage early, triggering a mad rush to the stage, but we made it just in time.

It was absolutely epic! The atmosphere was electric, with the room filled with so much energy, that you could cut it with a knife. Their set was so blistering, that it was hard to keep up, it was absolutely non-stop! Oh, and they had lovely female backup dancers with angle grinders and flashy lights, which was a neat bonus. DJ Kutski stood in for Zardonic, and whilst his set was nothing special, I still had fun (although the booze was probably talking at this point.) Mind you, Lab4 were a tough act to follow, so the impact was probably lessened because of that.

Lab4 sparked the place to life!

The final band to perform at Resistanz were The Gothsicles, which was a wonderful sentiment, as they were the first ever band to open the first festival. It was great to see it come full circle, with them even having a song specifically written for the event itself. With their usual anthems of videogames and nerdy stuff, they stormed through the set, all with the comical flair that fans have come to love. I admit, before Tanz, I wasn’t a fan. This converted me. Hits like ‘Save Dat mermaid’ and ‘Drop Dead Squid Face’ went down a storm. During the later, my friends and I started what we called ‘The Hump’ line, which was basically a conga line, but more awesome. Needless to say, it went down well, and even the band appreciated it. ‘Konami Code’ was the perfect ending to the set.

The Gothsicles, joined by a ton of bands at the end of their set!

As soon as their set ended, there were deafening chants of “Leighton” (the organiser of Resistanz, and the man responsible for it all), who ended up giving an amazing speech, thanking everyone, that made me tear up a little bit. However, it wasn’t over yet, the after-party got to a roaring start with a DJ set from Modulate Sound Systemelitist, that rocked the house. It was a pretty fun mix, that even involved a stage invasion, which I obviously got in on! That will definitely be a memory that will stay with me for a lifetime! Finally, and fittingly, organisers Phyll and L8N (Leighton) did the final DJ set, ending with Philip Oakey & Giorgio Moroder – Together in Electric Dreams. Cheesy, yes, but so many feels!!

Of course, the people are a big part of festivals, and it was epic to party with friends old and new once again, for one last time at Resistanz!

Overall, it was an amazing weekend! However, I’m absolutely gutted that it’s all over because, as I said at the start of this post, it’s a festival that’s very close to my heart. In fact, I’ll go as far as saying that Tanz was one of the best festivals I’ve ever been to! With Phyll and Leighton at the helm , we were always guaranteed an amazing weekend; they knew how to craft the perfect line up, to make the best parties in the world. Plus the people who attend are, quite frankly, awesome! I’ve honestly lost count of all the friends I’ve made when attending all the weekends since first going in 2013. I truly hope this is not the end, I really hope that it’ll return someday. Resistanz wasn’t just a festival to me, it was a part of my life; I’d always anticipate it during the months leading up to the Easter bank holiday weekend with every announcement, then unleashing that anticipation by partying as hard as possible the entire weekend. Now it feels like I’ve got a massive gap in my life that only something like Tanz could fill.

However, it’s legacy will never truly die. Resistanz truly gave the UK Industrial scene the kick up the arse it needed. It created the spark that took it all to a whole new level, which can still be felt to this day. It may be over (for now?), but it’ll forever live on through all of us.