I vowed to stay up a bit later on this day, as I had failed to make it to any of the after-parties the night before. Luckily, this day would be slower paced than the others so far, and a pleasant one too. It started with me making my way to ‘Awakened Consciousness’, an art exhibition by metal sculptor Ronald Knoll, to coincidence with the festival. Well, it was more of an art installation within the Hauptbahnhof (main station) Promenade, but it was still fascinating nonetheless! The level of skill and creativity was stunning, and the interpretations of each piece could probably be debated for hours.

Soon after, I met up with my friends, and I was introduced to a lovely group of people, as we assembled for food at Schnitzel Culture. Even though it wouldn’t look like it, this restaurant is fantastic, the food was divine! I discovered the joys of cheese soup (yes, that is a thing) and there were many weird and wonderful twists on the usual schnitzel formula. I feel awful for not being able to finish my meal, but my eyes were way too big for my stomach. Still, it was a great time, and even better because of the fantastic company!

A few of us travelled on to La Playa, a beach bar. Yes, Goths at a beach bar. We do still like to have fun, after all! It was in an odd location, surrounded by what could only be described as 70’s style brutalist architecture. The huge contrast between the beach setting and the area around it was quite amusing, and once in, it was nice to kick back and relax for a short while, sipping on delicious Tequila Sunrises (my favourite of all the cocktails.) 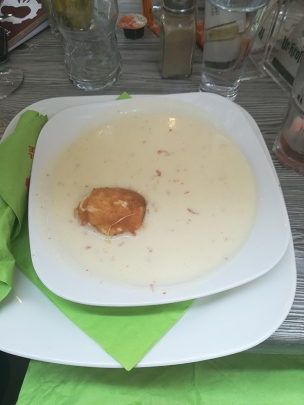 We didn’t stay too long, as we wanted to check out the Medieval market, ‘Heidnisches Dorf.’ However, due to Faun playing a gig at the time of arrival, there was a huge queue, so there was no way we were getting in, which resulted in us giving up. Faun are huge in Germany, so it baffles me that they were playing such a small venue. So, with that plan failing we quickly nipped to the marketplace at Agra to check out the merchandise on offer. I was stunned by how much there was available, and the sheer scope of it. Long story short, if you’re looking for anything gothic, it’s bound to be here!

I figured it was finally time to actually see a band (once again I’d missed plenty), and after regrouping with a friend at Haus Leipzig, we watched Cat Rapes Dog. An odd name, and also a band I’d not listened to before, but I went to see on a recommendation of a friend, so had no idea what to expect. Nothing could have prepared me for this, as it was one of the most electrifying, lively and epic bands I’ve ever seen at a festival! It was unrelenting from start to finish, and the constant changing of musical styles was extremely impressive. At times it was closer to EBM, at others Metal, before transitioning to Electropunk, then something more akin to rave. Yet it still had a distinct, unique core style that made them stand out. The musical prowess was top-notch, and they were almost flawless in their performance! One track in particular “Cannibal Hippies” was so intense, that it gave me the chills. The crowd went absolutely nuts, and were incredibly animated; they were really moving to the beat, there were moshpits and a few crowd-surfers. I’ve been to quite a few German festivals over the past five years, and never have I seen a crowd so wild. This only serves as a testament to how incredible the band were. Their presence was undeniable, and the atmosphere was so thick that you could cut it with a butter knife. Without a shadow of a doubt, this was my band of the weekend!

After such a spectacular gig, it was totally after-party time, I was very much up for it. So off to Agra we ventured. This time round, the music was more electronic, which was more to my taste, so I let loose on the dance-floor a bit, taking in the rhythm. Not long afterwards, I decided to meet with friends who were at Kobra Keller. It was awkward to find, especially when a bit drunk, but I somehow was able to catch up to them and go inside for more dancing. I admit, I don’t remember too much, because of alcohol, but I remember it being quite quaint, with a bunch of smaller rooms and it somehow fitting in two separate dance-floors, despite it’s deceptively tiny feel. In the end, I found myself venturing back to my hotel, to be greeted by daylight.