Just over a month ago, I was one of the privileged few, for on 6th September I found myself at the London Dungeon with a few other lucky fans (and some friends too.) Starting in a haunted pub, it was a whistle-stop tour of how brutal the UK’s legal system used to be, the world of Sweeny Todd, harrowing tales of Jack The Ripper (with a cameo from the man himself) and of when The Great Plague ravaged London. Walking through it’s labyrinthine corridors unveiled these grim evils to us, in the style of a dark, twisted horror house, complete with character actors who played their respective roles flawlessly. This cumulated in the party meeting within a room, where there was a Q&A session with Lacuna Coil’s Crisitina Scabbia and Andrea Ferro, conducted by Metal hammer’s Eleanor Goodman. This was followed by a meet and greet with the dynamic duo. However, before that final chapter of the event, we got to hear their new album Black Anima in full, and it was something I wasn’t quite prepared for…

The choice of venue for the listening party was quite an apt one, for darkness is the main theme that runs deep throughout the record. Much like Delirium before it, Black Anima follows a concept, this one telling of the darkness that lies within us all. The title itself very much reflects this, ‘Anima’ being Italian for ‘Soul’, so even in it’s title it sends a clear message that no holds are barred. It communicates this through a visceral energy, and if you thought Delirium was heavy, well… wait to you hear this! Somehow they’ve managed to become even heavier than before, and it packs one hell of a massive punch. Not to say it’s outright pedal to the metal all the time, there’s still plenty of moments for it to breathe, where it becomes more atmospheric, melodic or groovy, but when the harder moments do hit, it’s with quite a force.

“Anima Nera” serves as the intro to the record, although to just call it that doesn’t do the track justice. An unsettling ambience is prominent throughout, that only intensifies as things progress. There’s a strange sweetness to Cristina Scabbia’s vocals, but the lyrical content and atmosphere tell a different story. It feels as if being dragged in by dark forces, setting up the tone of the record perfectly. Then, with Andrea Ferro’s guttural roar of ‘We are the Anima’, “Sword of Anger” kicks in. This throws the listener straight into the grinder, as a barrage of heaviness impacts like the force of an explosion. His vocals switch between this raw intensity, and a cleaner style, as Cristina builds harmonies leading up to the chorus. It’s a fantastic dynamic, complimented by riffs that are reminiscent of their earlier work. Meanwhile, second single off the record ,“Reckless”, harnesses a twisted adrenaline. This is pretty apt, being as the song is about letting go, and loosing control. A chunky bassline adds to this impact, helping to drive the track forward. “Layers of Time”, (Black Anima‘s first single) on the other hand, slows things down a notch. Being a song about how the past cannot be changed, nor can we take back the bad things that have been done, it’s more reflective in tone. Hard riffs, in union with subtle symphonic effects make this a jaw dropping track. “Apocalypse” has some mystic qualities to it, as if walking through a dream. The moment it kicks in, it truly feels like a blast from the past, as if it were taken straight from 2003’s Comalies. Yet it still captures the heavier, darker essence of their more modern outings, becoming an impeccable melding of old and new eras. The start of “Now or Never” begins with creepy distorted tones, before the brutality kicks in again, becoming ferocious in pace. This leads into sweeping choruses, adding to the sense of desperation. The themes within this track make it feel like a Gothic horror tale.

“Veneficium” is indeed a massive departure for Lacuna Coil, and you’d be forgiven if you do a double-take at first.

“Under The Surface” continues the unrelenting pace, and is probably the most high-octane, energetic track of the entire record. It’s an extremely addictive one, having a pleasing, catchy rhythm and packed with aggression, which segues into lighter moments. I can tell you now, that this will go down an absolute storm live! Then we have… operatic vocals? A rich emphasis on symphonic elements? Latin vocals? Wait, what?! “Veneficium” is indeed a massive departure for Lacuna Coil, and you’d be forgiven if you do a double-take at first. I mean that in the best possible way, of course, as not only do they pull off this style, but they make it their own. It fits alongside the rest of their material, and Black Anima, like a missing jigsaw piece. The resulting outcome is something to behold, and to put it simply, it’s epic! Gritty layers of electronics signal the beginning of “The End Is All I can See”, as if a menacing doomsday machine is booting up. This seamlessly bleeds into the main refrain, which has an air of melancholy to it. This is effectively communicated within the lyrics too, emphasising the bleak hopelessness that the song is going for. “Save Me” captures yet another essence, being an incredibly emotional track. The melodies, alongside Cristina Scabbia’s stunning vocal delivery make it heart-wrenching. There’s a pure, raw emotion to it, that is bound to make even the most stone-hearted of listeners tear up. It’s extremely fitting that this belter has been saved as the penultimate song on the record. Then, as the grand finale, we have the title track “Black Anima”, and it’s sure one hell of a way to finish! There’s an eerie ambience to it, that roars into blistering riffs and beats, as Andrea Ferro’s mighty roars meet Crisitina Scabbia’s soaring harmonies one last time. There’s a prominent creepy piano that’s utterly haunting, goosebump educing even. It’s something that will stay with listeners long after the album has ended. 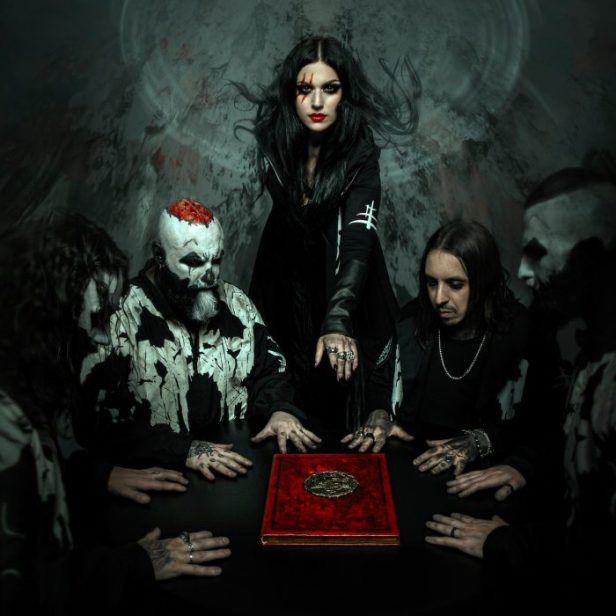 During the initial listening party, I found myself absolutely blown away. However, after walking away, I feared that the event itself had caused me to become overhyped, and that it was the overall experience that had enhanced the quality of the record. I can confirm that those fears were unfounded, as Black Anima is a triumph! It’s overall concept of the darkness within us not only make it a coherent package, but also the most realised, complete work that Lacuna Coil has ever produced. It does an outstanding job of conveying it’s emotional themes, to the point where they can genuinely be felt within each track. It’s a feat for a band to bottle such raw energy and craft these into sonic elements, it’s something else entirely for a band to so flawlessly execute this for the duration of an entire album!

The result is an evolution that not only feels completely natural, but one that feels like it was always meant to be.

Yes, I know all this praise is coming from a fan of the band, but even looking at things objectively, it’s stunning. I knew to expect a great album, but I wasn’t quite prepared to be so bowled over by it! This is without a shadow of a doubt the most raw and genuine that they have ever been, and it only makes the listening experience all the more compelling. It’s a roller-coaster of surprises and sounds, wrapped neatly together, grounded within a strong concept. It’s brutal, beautiful, emotional and epic in equal measure. Whether you’re a long-time fan, or a newcomer, there’s something for everyone here.

If Delirium was Lacuna Coil dipping their toes into something new, and experimenting with a heavier, darker sound, then Black Anima is them fully diving into the deep end. Yet they have still remembered who they are, as hints of the past are still present, making everything that’s old feel fresh again. The result is an evolution that not only feels completely natural, but one that feels like it was always meant to be. Black Anima feels like the album that Lacuna Coil were destined to make, and truly is their magnum opus.

Final Verdict: Black Anima is the darkest and heaviest material of Lacuna Coil’s entire career. It’s also their most complete, realised work, grounded by a strong concept, making it their magnum opus. This is am album that needs to be heard. By everyone.