There really is no slowing down for Chicago’s finest, is there? In what seems like no time at all, Cyanotic have already churned out yet another record. I honestly wonder if they ever sleep at all. Maybe they’re machines themselves, who knows?

Album eight, The Trigger Effect, is described as ‘a dystopian redemption arc in 30 minutes.’ The theme itself is somewhat subtle in terms of the overall sound, but it’s definitely there. It certainly starts off more aggressive and bleak than it ends, that’s for sure! You have to look to the lyrics to get the deeper meaning, all told in Sean Payne’s sharp, aggressive tones. There’s a superb use of sampling and effects throughout the record to back this up, as is to be expected with their output.

“We Live in Public” serves as the intro to the proceedings. There’s an eerie ambience to it, and it helps to paint a grim picture, before turning to a more unsettling mood. Chugging, sinister synths role as “Information Overload (Same as Always)” starts, exploding into a cavalcade of aggressive, distorted industrial metal. There are plenty of catchy hooks and the high-octane momentum keeps it energetic. Effects are utilised extremely well here (and the nerd in me will always recognise Sonic’s spin-dash sound effect in an instant.) “Stay Asleep” is, without a doubt, the sequel to “Signal The Machines” (from 2014’s Worst Case Scenario Vol.1.) It manages to capture the same atmosphere; utilising a gritty, dirty bassline and a rhythm that feels oddly sexual in nature. The tones are hypnotic, complimented by the track’s natural flow and evolution. The warped effects in “Structural Hostility” sound like a monolithic machine awakening. Suddenly, the pace is boosted tenfold, as it runs away into what I can only describe as electro Ministry. It’s more minimal than it leads the listener to believe initially, although the use of layers is effective. The brutal metal-like break downs that burst in add to the feeling of rising chaos.

Short and sweet seems to be what Cyanotic go for these days, and the trend has very much continued on The Trigger Effect.

Then there’s the epic cinematic mood to “Keep on Keepin’ On”, as if it were part of a film soundtrack. There’s a sweeping ambience that works in harmony with the electro-industrial layers. Even with it’s slower pace, it still feels heavy, yet some slick guitar sections insert a dramatic effect of urgency. Meanwhile, “…and I’m Scared” is a completely instrumental piece. The drumbeat here is so prominent that it reverberates through the eardrums, and throughout the body. The retro influences seem much more obvious here, as distorted effects blare all around. These meld together in a way that’s unnerving at times, like being trapped within the core of a corrupted virtual mainframe. “Blurring the Lines” begins in a much different style to most Cyanotic tracks, borrowing heavily from the drum and bass genre. Then the unmistakeable, anarchic, twisted soundscapes kick in. It mixes the two styles extremely well, keeping a vigorous stride alongside contorted, mesmerising electro, and metallic drumbeats. Oh, and bulky riffs for good measure! It’s “Coping Mechanisms” (yet another Worst Case Scenario Vol.1 track) on an acid trip. “Sit Back + Relax” closes the record, bringing low-fi effects and a drum style that make it feel like a war march (or perhaps that’s because it reminds me of the early Command & Conquer games). Unpredictably, it becomes something far more laid-back, constructing layers around this that build back up to a powerful energy. The addition of a clean sounding bassline is surprising, but it adds a groovy mood. 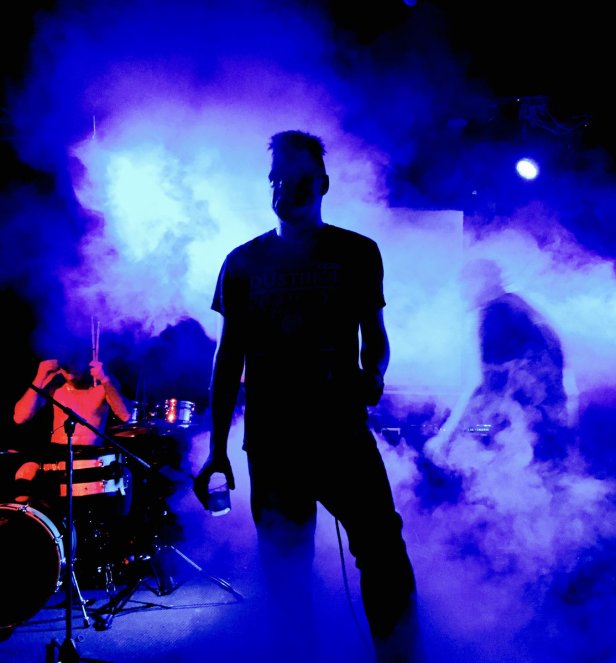 I’ve made this point on many occasions, but I’ll do it again – the 30 minute runtime may seem somewhat short, but it genuinely feels like the correct length. Short and sweet seems to be what Cyanotic go for these days, and the trend has very much continued on The Trigger Effect. Thanks to its shorter duration, it doesn’t overstay it’s welcome and makes it much easier to dive back in for multiple listens, which I guarantee you’ll very much want to do. As the old saying goes ‘quality over quantity’, and I can definitely say that the quality here is to the highest standard, with razor-sharp production qualities.

It’s easy to get lost in how this album sounds, as it conjures visions of futuristic dystopian landscapes

The Trigger Effect not only feels like a push forward with Cyanotic’s newer style, but it also captures the essence of their earlier work. There’s the heavy emphasis on experimental electronics, yet there’s a rough edge that runs through it’s core. It could be argued they’re depending on past material too much, but I feel the callbacks help to enrich the experience. It contextualises the overall sound, as well as being the perfect mashup of old and new-school styles. Hell, they could have called this album ‘Worst Case Scenario Vol.3’, and it would have worked!

Sonically, this is Cyanotic at their grittiest and very best, the cumulation of harsh electronic effects and deformed guitar riffs have all the qualities of cyberpunk. It’s easy to get lost in how this album sounds, as it conjures visions of futuristic dystopian landscapes. It’s a record that can be enjoyed without ever realising the ‘redemption arc’ theme. Then again, even though it’s more subtle in nature, reading in-between the lines makes it a more intriguing journey.

Final Verdict: The theme is somewhat subtle, but the sound has razor-sharp production qualities. Heavy, distorted electro combined with bulky, warped guitar-work, alongside the fine use of sampling and effects, captures the very essence of dystopian cyberpunk futures